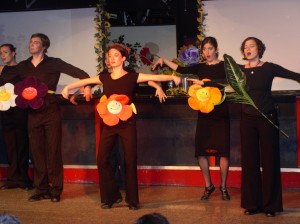 Characters:
Full Cast (see size adjustments below for larger or smaller casts):
Lily – Flower 1, interested in beautiful things and smells, peacemaker, likes to bring news to others
Iris – Flower 2, somewhat aggressive female, religious, empowered
Daisy – Flower 3, airheaded & prone to speak nonsense, creative, talks to the wood nymphs
Rose – Flower 4, loving, says a lot without saying much, strong and brave
Narciccus „Cissi“ – Flower 5, is a Daffodil, selfabsorbed, thinks she’s more beautiful than any of the others, likes to flirt with Sweet William, creative
Sweet William – Flower 6, aggressive male, thinks he has all the answers, protective of the others, brave
Poppy – Flower 7, assertive male, slightly older than the rest, creative, active, dainty, full of zest
Violet – Flower 8, perky, believes in magic, modest
Mum – Flower 9, maternal, tries to keep everyone in line and under her control, leader of the flowers
Lavender – Flower 10 – One Out of Ten, she doesn’t fit in with the other flowers and despises her lot in life, she wants to find a place where she belongs, intelligent, bitter, angry
Bud – Horse, always hungry but easily confused, belongs to
Jason the Healer, has a tendency to wander away
John – Margaret’s brother, doesn’t like flowers, destructive, brave
Margaret – John’s sister, pretends not to like flowers because her brother doesn’t like them, giddy, playful
Jason – Healer, uses herbs and natural cures, quiet, gentle, empathetic, wise
Wendell – Sick Man, middle-aged, well-mannered, desperate for help from the healer, stooped over, wears a trench coat, limps
Villagers – Sick people from the town, they line up for help from Jason the Healer

Larger Cast Adjustments:
There must never be more than ten flowers. However, it is acceptable to have more than one actor to play a single flower if the costumes are designed to maintain the integrity of each individual flower (for example, one actor plays the flower and another plays the leaves). Additional children can be added to stomp the flowers and trees can be added to the forest to sing along with the flowers. Actors can play the rain and sing the rain song instead of the flowers. Additional text may be added only with permission from the authors or by requesting adjustments from the authors for a specific cast.

Smaller Cast Adjustments:
The minimum number of actors needed is six. The flowers can be reduced to five live actors with prop flowers for the remaining five. Combine flowers as follows: Mum & Lily; Daisy, Rose, & Violet; Sweet William and Poppy; and Iris and Cissi. Lavender cannot be combined. The  children can be reduced to one and played by the same actor as the horse, sick man or healer. The healer or sick man can also be played by the same actor as the male flower. The Villagers can be played by the remaining „flowers.“