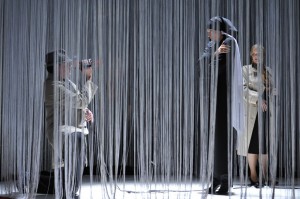 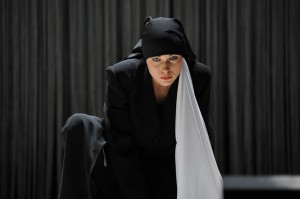 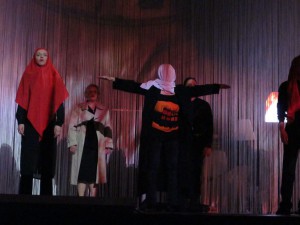 About:
The short opera 20 Minuten, awarded with the Berlin Opera Prize 2010, tells about the last 20 minutes in the live of a young female bomb assassin. Even before its premiere in Germany in 2010 it received quite a lot of attention, as the content of the story made many people feel uncomfortable, leading to a „no, thank you“ from the Prime Minister of Turkey to an invitation by the Neuköllner Opera in Berlin. Despite the believe of press and media, neither mine nor the intention of the librettist was to take a stand or show a black and white scenario. Our interest was to look into the mind and emotions of a persons, who is pushed to the limits. She loves her live and wants to live – she is even pregnant – but also driven by her parents believe. The closer she comes to pushing the button the more she loosing her self, her thoughts, the outside – the inside. Words become just sounds as her mind is shutting down. Even though luckily we will never have to faith this situation, the world has shifted drastically and every day we can be driven to a situation that can push our “human” limits to its test. We are harmed by war, nature catastrophes, or loosing our job and so the change to take care of our self and our family. All of this can make us feel totally lost, we have no control of our life, everything slips away and we don’t see a way out.

My question was: What does it sound like when everything around and inside you is slipping away? No physical or emotional strength can help you any more. You are controlled by things you can’t control.